We implemented ground state cooling of a single Mg-25 ion in our linear Paul trap using a single laser system [1]. The performance of our cooling scheme was measured by comparing the excitation on the motional sidebands.Since the red sideband decreases the motional quantum number of the harmonic confining potential, its excitation vanishes if the ion occupies the lowest energy state, i.e. the ground state. This effect is shown in the following graph for a Doppler cooled (upper graph) and sideband cooled (lower graph) ion. A quantitative analysis which compares the excitations on both sidebands yields an average population of 0.05. 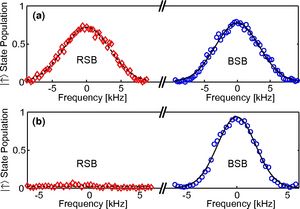 Another indication that the ion occupies a single motional quantum state emerges from the fact that the Rabi frequency depends on the harmonic oscillator level. Thus, a Doppler cooled thermal ion will show Rabi oscillations with multiple frequency components, whereas an ion in the ground state reveals a Rabi oscillation with a single frequency component only. This is shown in the following graph (red diamonds: Doppler cooled ion, blue circles: sideband cooled ion).