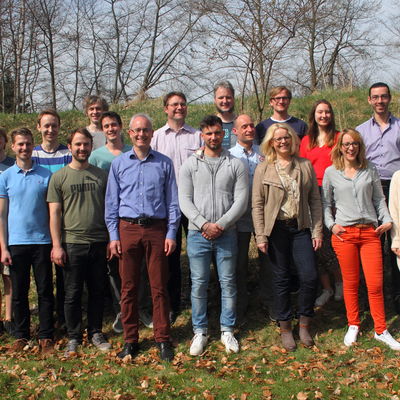 The research activities at the Research Group QUEST 1 "Quantum Logic Spectroscopy" revolve around fundamental questions: Are the constants of nature actually constant? How accurate are the predictions of physical theories? The variation of fundamental constants predicted by several theories would manifest itself in a shift of atomic and molecular energy levels. Therefore, these questions can be answered by precision measurements of the internal structure of trapped and laser-cooled ions. Quantum engineering techniques developed for quantum information processing allow probing of previously inaccessible atoms and molecules with unprecedented accuracy.

The picture shows a sketch of an ion trap illustrating the principle of quantum logic spectroscopy: a logic ion (blue) is used for cooling, state preparation and readout of the spectroscopy ion (red). Using this "quantum logic spectroscopy", a highly accurate optical clock based on a single aluminum ion is being developed. A comparison with other accurate clocks allows the detection of a variation of fundamental constants, deviations from Einstein’s theory of relativity, but also more practical applications, such as measurements of the gravitational potential of the earth (relativistic geodesy). In addition to these laboratory investigations, also astro-physical approaches are supported. Absorption spectra of interstellar clouds are compared with today’s precise quantum logic spectroscopy data to probe a possible variation of constants on cosmological time scales. These research results will aid in developing a refined theory and therefore an improved understanding of nature.

More detailed descriptions of our different research projects can be found here.

You can also find a summary of our research projects in our contribution to a special issue of the PTB Mitteilungen or in the June 2012 issue of the Physik Journal (in German).