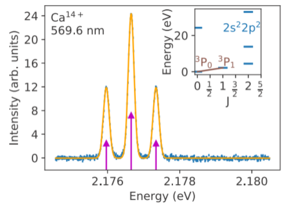 Atomic clocks operate at extraordinary levels of precision and accuracy, and can be used for searches for new physics beyond the Standard Model of particle physics (SM) by searching for miniscule deviations in their operating frequencies. For example, a hypothetical fifth force between the neutrons of the nucleus and the electrons of the shell would lead to deviations of measured isotope shifts from theoretical predictions. However, other effects from within the Standard Model or uncertainties in the nuclear masses can also lead to deviations, masking any signal from new physics. These effects can be suppressed by adding more atomic transitions into the analysis, referred to as a generalised King plot (generalized King plot), but in general neutral or singly-charged ions do not offer enough further transitions that can be measured with the required sub-hertz levels of accuracy.

In our new paper, together with our colleagues from the Max-Planck-Institute for Nuclear Physics (MPIK), we experimentally and theoretically study six transitions in highly charged ions of calcium (Ca11+ - Ca16+). Calcium has five stable isotopes of zero nuclear spin, which makes it ideal for such isotope shift measurements. Some of the investigated transitions are suitable for high-precision coherent laser spectroscopy using quantum logic, in the manner that was recently demonstrated by our group (recently demonstrated). Our results provide a sufficient number of additional clock transitions for — in combination with those of singly charged Ca+ —application of the generalised King plot method. This will allow future high-precision measurements to remove higher-order SM-related effects and open a door to yet more sensitive searches for unknown forces and particles.

The paper can be found here.