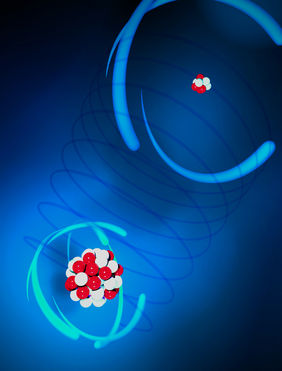 The HCI collaboration has just published an article in Nature on the quantum logic spectroscopy of 40Ar13+. Congratulations!

Abstract: Precision spectroscopy of atomic systems is an invaluable tool for the study of fundamental interactions and symmetries. Recently, highly charged ions have been proposed to enable sensitive tests of physics beyond the standard model and the realization of high-accuracy atomic clocks, owing to their high sensitivity to fundamental physics and insensitivity to external perturbations, which result from the high binding energies of their outer electrons. However, the implementation of these ideas has been hindered by the low spectroscopic accuracies (of the order of parts per million) achieved so far. Here we cool trapped, highly charged argon ions to the lowest temperature reported so far, and study them using coherent laser spectroscopy, achieving an increase in precision of eight orders of magnitude. We use quantum logic spectroscopy to probe the forbidden optical transition in 40Ar13+ at a wavelength of 441 nanometres and measure its excited-state lifetime and g-factor. Our work unlocks the potential of highly charged ions as ubiquitous atomic systems for use in quantum information processing, as frequency standards and in highly sensitive tests of fundamental physics, such as searches for dark-matter candidates or violations of fundamental symmetries.

Link to the publication in Nature